Raise the rubber boot up the mirror stem to expose the hex cinch nut (upper) and hex nut for the male mirror stud.  While your mirrors are in the stock position, hold the lower nut with a wrench and loosen (do not remove) the upper cinch nut with another wrench.  You should be able to turn the mirrors still attached to the handlebars 360 degrees at this point.

You can see the upper cinch nut and the lower male stud nut in the picture below. 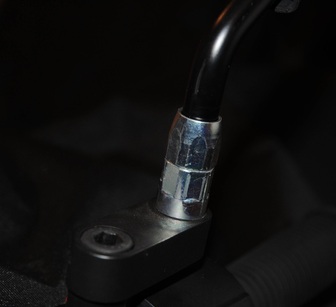 Holding the lower nut with the wrench, rotate the mirror until it moves freely (freely is relative with these mirrors. They stay hard to move even with the cinch nut loose.)

Unsrew the mirrors from the stock mount using a wrench.

Place the mirror extenders on the stock mount and screw in the supplied allen screws loosely.

Align the extenders, pointing away from each other instead of aligned with the handlebar for maximum width (or align them with handlebar for less width.)

Screw the mirrors into the extender tight.

If your 2012+ DL650 or 2014+ DL1000 mirrors appear to have left hand threads, you removed the cinch nut instead of the male mirror stud that is probably still in your handlebar mirror stem.

Holding the lower mirror nut with a wrench rotate the mirror clockwise to the desired postion.